Catenon is a listed Spanish technology-based global selection multinational that operates under the web squared model. It operates as a single international office with the objective of finding, evaluating and presenting candidates from all over the world to its customers, who may be based in any other part of the world. In an objective manner and using a multimedia format on its own web squared technological platform. 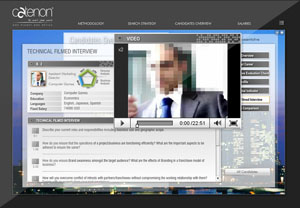 It operates as a single international office and its mission is to locate, evaluate and present candidates from all over the world to its customers, who may be based in any other part of the world. In 20 days and using objective methods via the Internet, in a multimedia format on its own technological platform that includes the filming of technical interviews.
Catenon has 24 offices in 17 countries and has already carried out operations in more than 100 countries in all five continents, thanks to its knowledge architecture based on Advanced Artificial Intelligence (AAI). 72% of its business comes from outside Spain and its customers include 75% of the companies listed on the IBEX 35 stock market index, and dozens of companies on the Fortune Global 500 lists.  Catenon was first listed as a stock market trading company in Spain in 2011.
As opposed to the obsolete models focusing on local searches for professionals that existed before the globalisation of markets and the appearance of the Internet, Catenon deconstructs traditional industry in order to attend to the needs of the new global executive search market. A market that predicts intensive growth over the next 10 years, due to the disappearance of international barriers, the increase in mergers in various countries, and cooperation between countries and technology, which enables talent to be detected and connected instantaneously, thus converting global mobility into a normal process.