Renfe is a large internationally-renowned Spanish company carrying over 1.5 million passengers a day on more than 1,600 wagons. 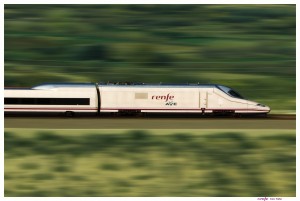 Renfe is one of the most important railway companies of Europe. Its origin took place in 1941 but after the new Railway Sector Law, which tends to the progressive liberation of this way in Spain, 1st of January of 2005; it was born a new Renfe exclusively dedicated to passenger and good traffic as well as it dispenses with its old responsibilities about railway infrastructure.

A major renovation of its corporation image has given way to a new company closest and more dedicated to the client service, with desire to leadership, a big social value and a modern and professional capacity of management that pretends to combine its performing and the functional values with the emotional ones.

Renfe is, therefore, a large internationally-renowned Spanish company carrying over 1.5 million passengers a day on more than 1,600 wagons.