The trap of Asia-Pacific and North America

The global outlook for 2013 by Crédito y Caución forecasts approximately a 2% growth in world trade, propelled by the evolution of emerging countries. however, emerging regions with higher economic growth rates also have increased levels of default right now.

2013 will bring with it a challenge for Spanish companies. The natural market growth will remain very weak. Demand and private consumption will remain depressed due to the unemployment rate, wage pressure, the fragility of the banking sector and austerity measures.

To overcome this complex environment, our companies must face up to an unprecedented improvement in competitiveness and productivity. Spain’s natural market represents only 1% of the global market. Today, the question that almost all Spanish companies are asking is how to deal with the remaining 99%. Does it make sense to internationalise my activity? What markets should I attempt to enter? What marketing strategy should I use? Answering these questions correctly is more important than ever today.

The Spanish export sector is relatively healthy and competitive, but has limited geographical diversification. About 60% of our total exports are concentrated in the euro area. One of the great challenges facing our business fabric is to change its low presence in Asia-Pacific, the current hub of economic dynamism.

If we had to compare the world to something at this moment it would be the
surface of a huge pond disturbed by waves produced from a falling stone. In our 2012 Spring Outlook, we already stressed the importance of the crisis in the euro area and its impact on the global economy. In 2012, for the first time, the risk of a collapse of the euro area was considered as a possibility. crédito y caución did not believe then, or now, that the collapse could occur because, in our opinion, there are strong economic forces that will oblige measures to be taken, perhaps reluctantly, to control the crisis: the cost of a collapse, in economic and political terms, is simply too gigantic. However, it cannot be excluded that politicians or a drifting electorate will not take the measures onboard, something which would have consequences similar to the fall of Lehman Brothers for the global economy. 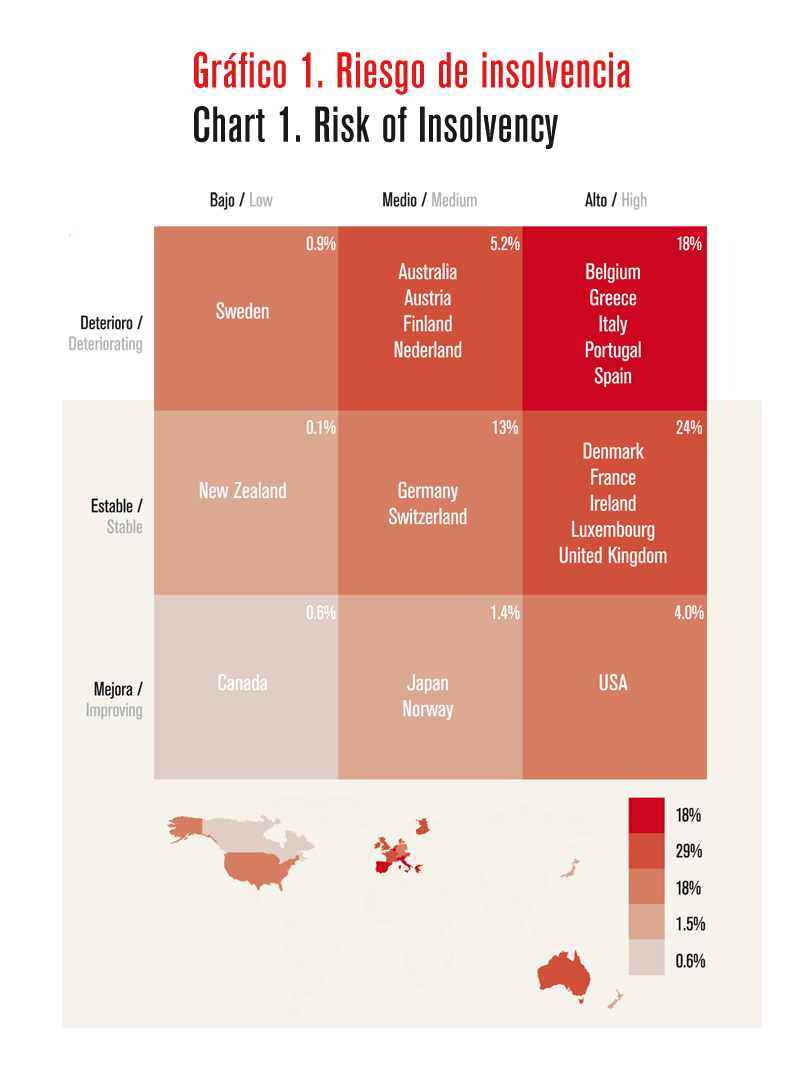 Six months later, the best summary from our Autumn Outlook with which we enter 2013 is that we have not gone any closer to the abyss of a new global economic crisis. This is good news. We can even say, based on the results of the June eU summit that the situation has improved, at least on a fundamental level. Indeed, along with the fiscal Pact, the eSM, the european Banking Supervision and stronger action from the ecB in the sovereign debt markets, steps have been taken towards fiscal and banking union. These steps have clearly strengthened the architecture of the european Monetary Union. However, at the same time, as is usual in european affairs, the implementation of measures faces many obstacles, mainly of a political nature. This is the main reason why we cannot reconsider our assessment of the risk inherent today in operating in the global economy. It is simply too early to do so.

Growth plays a part of our outlook for 2013. The turmoil affecting the euro area has been stabilised, the US has announced a new dose of monetary stimulus that will take the form of a third quantitative easing programme and china is firmly trying to avoid a hard landing by injecting 158 billion dollars. We expect global economic growth in 2013 to grow two tenths to 2.8%, due to Western europe emerging from the recession and the newfound momentum in emerging economies.

The main engine of the global economy in the coming period will continue to be the growth in Asia and Latin America, where our exports are growing at rates of around 20%. emerging economies are overtaking the advanced economies and their economic clout continues to grow. The economy of the euro area will stagnate, with growth of only 0.2%. The outlook for emerging europe is still very influenced by tight credit conditions and the weak economic climate in the euro area. However, it is expected that growth in the region will increase to 3.3% in 2013. 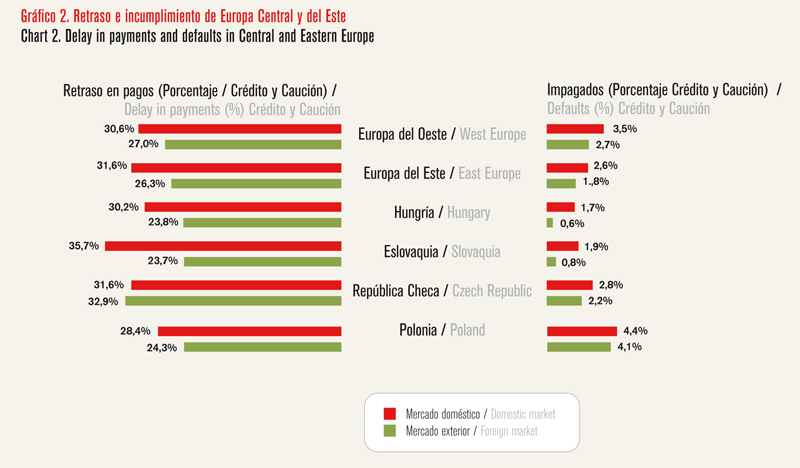 Growth in Latin America will increase to stand at 3.8%, while growth in Asia will stabilise at 4.9%. china’s economic growth has slowed down more than planned in the last six months, due to a drastic fall in export growth, but it is expected to rise to 8.1% in 2013. The Middle east and north Africa continue to experience political unrest and economic crises. The United States will continue its sluggish recovery with an expected growth of 2.1%. An escalation of the crisis in the euro area remains the greatest risk factor for the performance of these world views. A significant rise in oil prices would also have a significant impact.

Within this framework, global trade between businesses will grow by 2% in 2013. A 2% increase in activity, opportunities, customers, growth in the top line of the account etc. The growth is out there but capturing it in the business environment will be extremely tricky for companies. Many markets we already export to are ailing. Our forecasts of insolvency in 2013, as seen in this small three by three matrix (figure), point to a further deterioration in many markets, starting from the current high levels. According to our economic forecasts for major OecD markets, only the United States, Japan, norway and canada will see signs of improvement in their insolvency levels. Our perception of corporate credit risk is still negative and the business world presents a significantly greater risk of default than a couple of years ago. 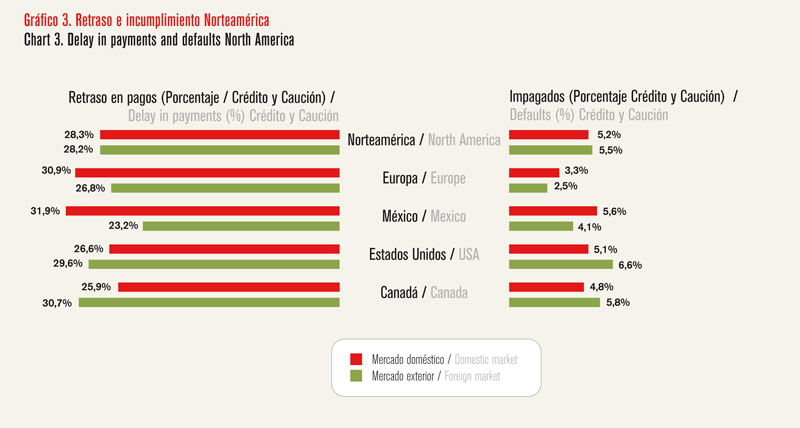 Companies in the Asia-Pacific region have experienced a significant increase in the default rate in trade transactions. The value of bad debts has gone from 3.6% in 2011 to 5.0% in 2012. This figure rises to 7% in India and Singapore and stands at a minimum of just 2% in Japan. About 30% of the total value of trade transactions between companies in Asia, regardless of whether they are transactions to domestic or foreign customers, is paid late. In fact, over 10% of invoices are still unpaid three months after they expire. The highest percentage of B2B invoices overdue corresponds to Hong Kong, with 35%.

Exporting to north America is also much riskier today for a Spanish company than a year ago. Almost 28% of invoices are paid late in these markets and collection periods are clearly growing. But perhaps the most significant aspect is that the default rate on trade between companies in north America has grown to 5.3% compared to 4.0% in 2011. The default levels have increased in all three markets in the area. canada recorded the highest growth of all three: the index nearly doubles its value rising from 2.9% in 2011 to 5.2% in 2012. United States, where the 2011 rate stood at 4.6%, rose to 5.6% level, the highest of the three. Meanwhile, in Mexico, the growth is one percentage point, going from 4.3% to 5.2%. 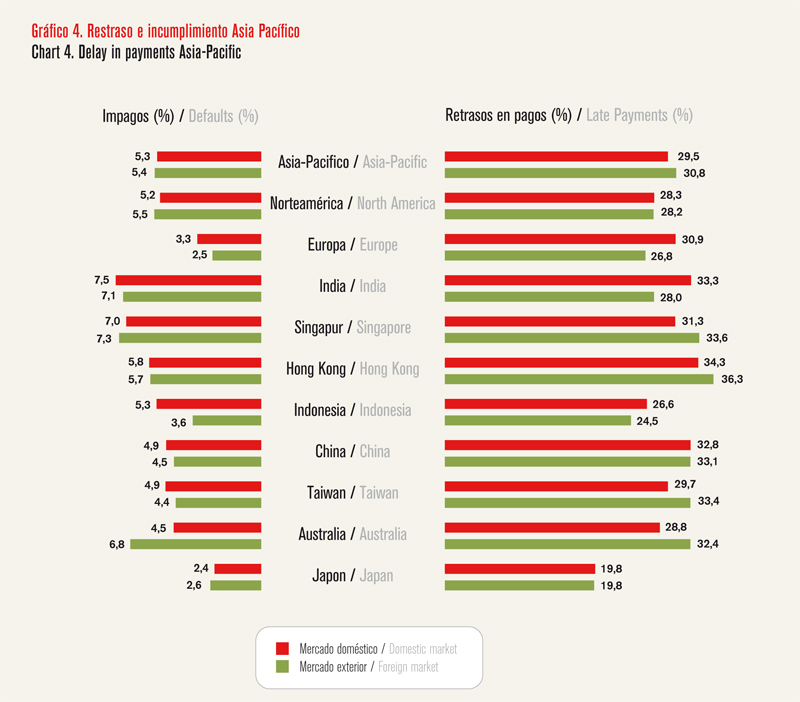 In Mexico, the domestic market performance has more pronounced default rates, with 5.6% representing debts compared with 4.1% in operations with foreign debtors. In the other two markets, however, the risk is higher in foreign trade. In the United States the gap is particularly large, with a default rate of 5.1% in the domestic market compared with an average of 6.6% that Spanish companies seeking to enter this market have to bear. In canada, the 4.8% rate in domestic transactions rises to 5.8% by buying from foreign companies. Insolvencies in the US and canada have been declining in the past two years, but the increase in defaults reflects the fact that lower failure rates do not necessarily translate into lower defaults.

In central and eastern europe, the economic climate instability affects 30% of the trade receivables, which are being paid late. Slovakia is the market showing most domestic problems with overdue loans, almost 36%, while the Czech Republic registers the highest percentage, 33%, of foreign invoices paid late. However, perhaps the most significant point is that the performance of eastern europe is significantly better than other emerging regions. Only 2.6% of domestic trade receivables are outstanding and the rate remains at 1.8% for foreign bills. The highest average rates of default are recorded in Poland: 4.4% in domestic loans and 4.1% in foreign operations.

The economic contraction in the euro area has considerably slowed down growth in central and Eastern Europe. Somehow, emerging regions with higher economic growth rates have also increased levels of default at present. These growths in default rates indicate that we are still in a very unstable cycle. corporate insolvencies remain at high levels, a sign that companies seek to grow in an aggressive way, underestimating demand problems.
Managing the commercial credit risk and protecting the business of defaults is essential for success in the internationalisation process in this fragile business environment. Helping Spanish companies obtain the security they need to lead global growth opportunities is central to the mission of crédito y caución.

2 thoughts on “The trap of Asia-Pacific and North America”