Panorama of spanish investment in LatinAmerica

Extract from the 5th edition of the report “2012: Panorama of Spanish Investment in Latin America”, compiled from information from a sample of over 30 Spanish companies belonging to the Ibex 35 with the highest turnover and a presence in Latin America.

The Latin American subcontinent continues to be, and increasingly so, the preferred area of investment for Spanish companies. IE Business School discusses current prospects for the present and future of Spanish investments in Latin America, from the view of some of the Spanish companies with most notable presence in the region.

The global financial crisis, political and social instability in some countries in the region together with recurrent natural disasters, other investors like china and the US or, on the other hand, its immense natural wealth, the new powers in Latin America, the tax and legal benefits for foreign investment, common language, etc., are some of the angles from which this analysis is devised.

The better economic performance of Latin America compared to europe and, in particular, to Spain, is the reason that more than 90% of the companies surveyed are increasing their activities in the region. But even more remarkable is that nearly half of the companies consider that trade there could exceed that of the Spanish market in the next three years.

Again, due to economic developments in recent years, Brazil is becoming the most interesting destination for Spanish business operations because of the possibilities and realities of its huge market and its increasing role in the global economy for 88% of the Spanish companies surveyed, Brazil is the most attractive market in Latin America and almost all of them think that the major sporting events to be held in the coming years, the World cup and the Olympic Games, will provide an incentive forexpansion. Also relevant is that a significant majority of respondents think that there is no sign of a possible overheating of the Brazilian economy and that it will continue to grow in the coming years, albeit in a more controlled fashion.

Spanish companies continue to have a strong presence in Mexico, chile and Argentina, while their presence in colombia and Peru is increasing significantly, as more than 85% of respondents believe that the economic performance of these countries will be good or very good. On the contrary, ecuador and especially Bolivia and Venezuela are the markets that raise most doubts with regards to their economic development.

On the other hand, the attractiveness of their domestic markets is once again the main competitive advantage that the economies of the region offer Spanish companies. This is consistent with the growth in consumption and income that has been occurring in most countries in the region in recent years, despite the disruption caused by the financial crisis. In addition to this, it is noteworthy that the rest of the aspects covered by the survey have increased in terms of their valuation, except for the qualification of the labour force, which remains the characteristic least valued by Spanish companies.

Again, a multi-location presence remains the preferred option for Spanish companies when locating their core operations, followed by São Paulo. Mexico city occupies third position and, for the first time, Miami features in the list of favourite cities.

As mentioned earlier, Brazil is taking shape as the most attractive market in the region and discrimination is increasing between countries that are also considered attractive (Mexico, colombia and Peru) and others that are less attractive (Bolivia, Ecuador, and Venezuela). In this regard, while there is the perception that it is the possibilities for developing the domestic market which most attract these Spanish companies (and therefore it is not surprising that it is the countries with large and/or very stable domestic markets that spark the greatest interest) the range of competitive advantages in the region is expanding.

Despite international financial difficulties, Spanish companies’ commitment to Latin America remains strong, and this endeavour has proven to be fruitful at a time when the domestic market is declining and that the european market is showing signs of stagnation compared to 2010, the presence of Spanish companies has increased in Peru, Brazil, chile and colombia.

Also, although to a lesser extent, the presence of Spanish companies in Bolivia, ecuador and Uruguay has increased, for the first time reaching 50% of respondents.

Presence has fallen substantially in Venezuela.

Commercial presence: Brazil, Colombia and Mexico stand out in particular.

Exports: In comparison, investment and commercial presence are much higher than exports to Latin America from Spanish companies. 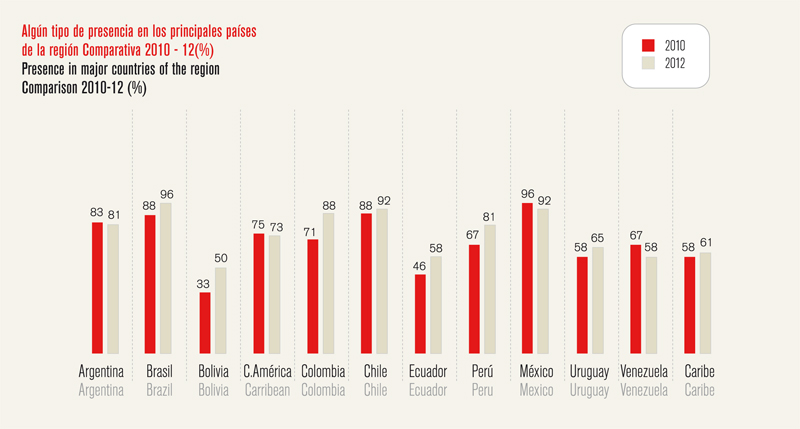 ARGENTINA
By Darius Bengoechea, broker for Argentina in Spain.

There are 210 Spanish companies established in Argentina. According to the fDI ranking (foreign Direct Investment), Spain is the leading country in terms of fDI stock, with 25% of the total. This percentage translates to 23.144 billion dollars. America is next in the ranking with 16.8%.
The most important service in terms of fDI stock is telecommunications. In fact, Telefónica has announced that it will invest about 10,000 million pesos (about 2,000-2,500 million dollars) in the period 2012-15 in relation to the incorporation of technology in fixed and mobile telephony. The telecommunications sector is undoubtedly a strategic sector for investment in Argentina. 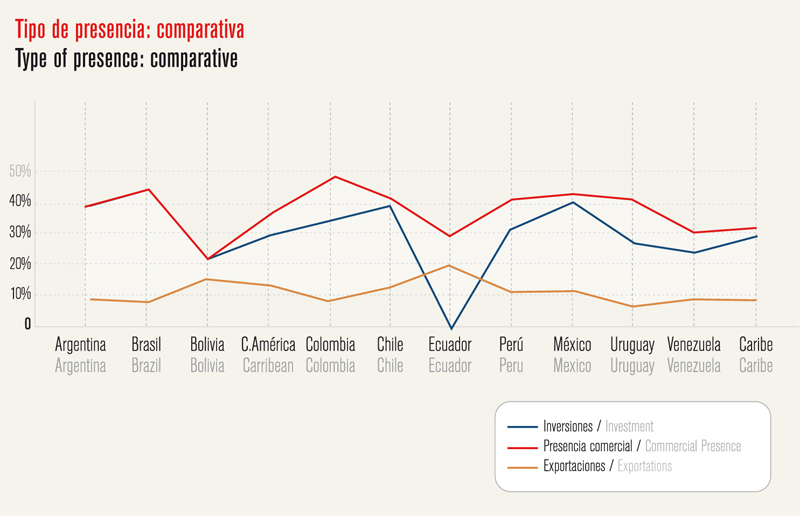 BRAZIL
By Antonio del Corro, executive Director of the chamber of commerce Brazil-Spain.

Spanish entrepreneurs, both from large companies and SMes, see Brazil as one of the more secure investment opportunities and thereby they are making direct investments in Brazil or at least trading in the country. It is true that trade is lower, but it is also on the up just like investments.

Notably out of the more than 190 million Brazilians, 53% of the population is middle class and in the in the last 15 years 30 million have joined this group, with the figure increasing by 1% or 2% each year. entrepreneurs in Brazil and the Brazilian government with their social policies are trying to encourage consumption among the lower classes.

Brazil has key aspects that attract Spanish investment: legal security, its large size as well as large national and state projects. The  PACs (Growth Acceleration Programmes) are the biggest incentives for Spanish companies. It is not necessary to wait until 2014 or 2016 to enter Brazil. now is the time; there are possibilities in all areas.

Spain is the second largest foreign investor in Brazil, second only to the US. About 50% of the investment comes from Banco Santander and Telefónica. Another significant portion comes from the major Spanish companies (Iberdrola, OHL, Hispasat, Endesa, La Caixa, etc.). SME investment is in line with their size. 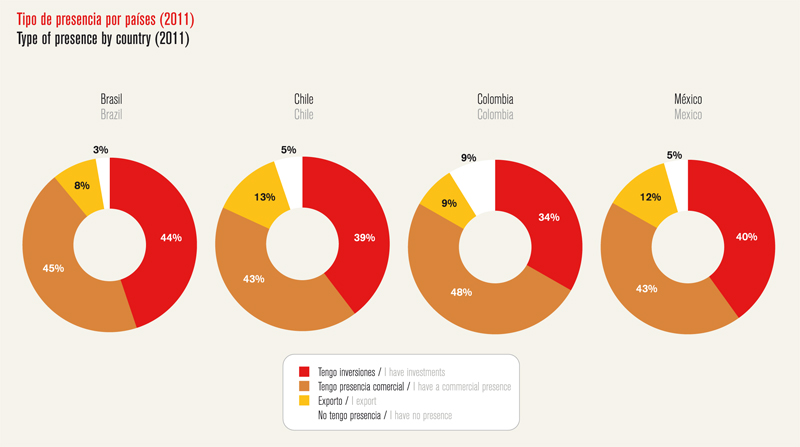 The major Spanish companies belonging to the Ibex 35 and forbes have been present in chile for more than 20 years. During the current crisis, Spanish companies have not made any new investments but they have expanded existing ones. There is a generation of chileans who believe that the majority of Spanish companies that are in chile are chilean. nevertheless, despite this trend, in recent years SMEs have increased their investments in chile. currently, the country has an average of 100 to 150 companies that are setting up shop there every year in the production, technology services and trade sectors.
Spain is the largest investor in chile in terms of number of companies. There are 1,200 companies established in the country so far. In terms of investment, it is second, after the United States. As a block, europe is the largest investor in chile, with Spain representing 50% of this investment, followed by the UK with 10%. 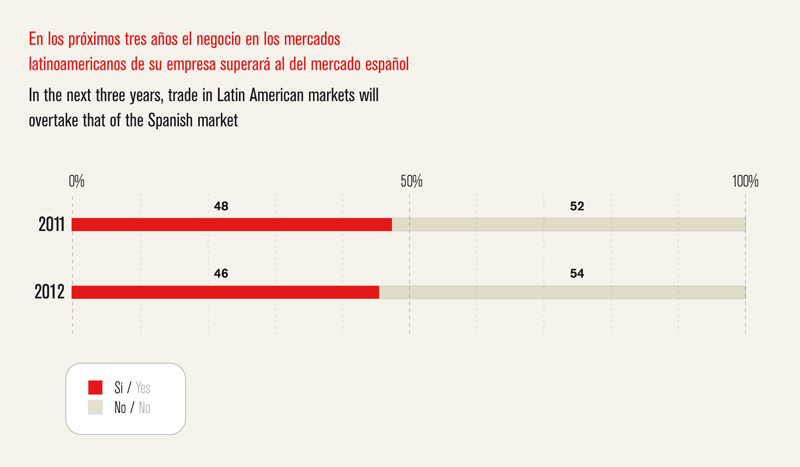 Spain is the third country in terms of investment stock in colombia, behind the US and UK. There are almost 300 Spanish firms that already have a physical presence in Colombia, many of which have production sites, with others having representative offices. We are now in a third wave of Spanish companies focusing on colombia. The first occurred in the 90s, with the advent of large Spanish infrastructure, energy, and utility companies. We are talking about companies such Aguas de Barcelona, which manages the waters of cartagena de Indias through its subsidiary Aguas de cartagena and canal de Isabel II, which manages the waters of Barranquilla, Endesa, etc.

This first wave of Spanish companies occurred during the era of privatisation in Latin America. The second wave was a little later with the arrival of Spanish companies in the financial sector (BBVA, Santander etc.), telecommunications (Telefónica) and communication (with the arrival of the Grupo Prisa and Grupo Planeta). finally, the third wave is the one being experienced now, characterised by SMEs that are investing in colombia in a wide variety of sectors: call centres, hotels, manufacturing companies, security companies, etc. This is leading to a diversification of the investment in colombia, and Spain is one of the countries investing the most.

Spain is the largest investor in Peru. This trend began almost 20 years ago with a large investment from Telefónica to buy compañía Peruana de Teléfonos as part of the process of the privatisation and the search for efficiency in state enterprises. After this, investment has increased gradually and today almost all the big Spanish companies are in Peru (OHL, Acciona, Abengoa, ACS, Repsol, Cepsa, etc) in different sectors: finance, energy, engineering, transport, telecommunications, insurance, water treatment, among others.

What is changing is that there are more and more SMes setting up shop in Peru. Largely this is thanks to the big Spanish companies that have been in Peru for years and which require the services of SMEs.

22 thoughts on “Panorama of spanish investment in LatinAmerica”