Spain and the asian challenge

Asia has been, for some years, the main global powerhouse for growth, and its economic and geopolitical role on a global level is increasingly important, in particular considering the weak situation of most Western economies.

As shown in the figure 1, the main countries in the region have maintained a strong position in a particularly difficult global climate in 2011. Japan’s negative growth this year can be pinpointed to the consequences of the terrible tsunami that devastated the Tohoku area. The damage has been overwhelming from a human standpoint, but economically the country is showing good signs of recovery, considering that the damage from the disaster amounted to more than 5% of GDP. 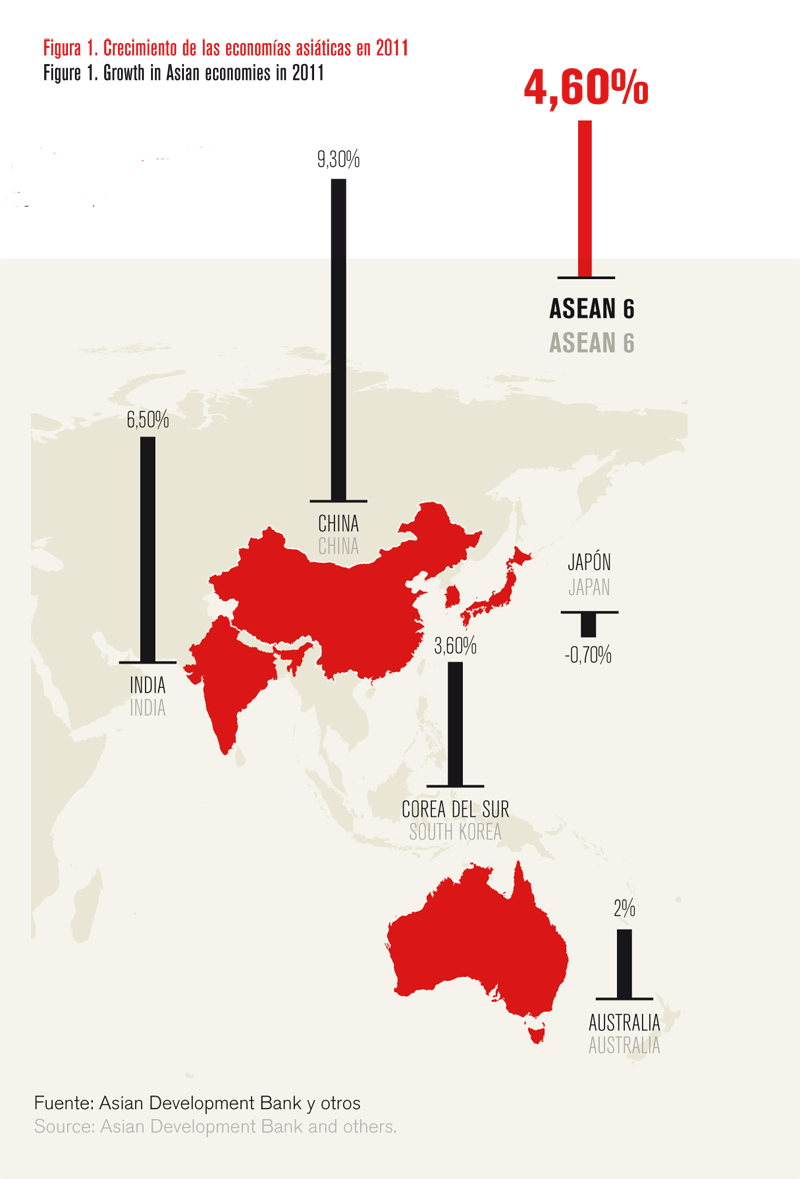 In the near future it appears that the main economic powers in the region will experience moderate growth, especially owing to the fall in exports to europe and the United States. However, Asia is in an excellent position to meet future challenges. This is due to a number of reasons, which we will now explain.

First, there is a lot of scope for expansionary policies from a monetary and fiscal standpoint and with a few exceptions; governments in Asian countries and their populations are not over-indebted. In this sense, the result of the financial crisis that hit many countries in the region in 1997 is that large amounts of foreign exchange reserves have been accumulated while maintaining an orthodox economic policy, thus allowing them to face the future with healthy accounts.

Second, in many lower-middle income Asian countries there is also great potential for the development of domestic consumption and the service sector, so growth through exports will have an impact on other areas provided that policies are correct.

Finally, focus has been on innovation as a model for future development. In this respect investment in R&D in Japan and South Korea in relation to GDP exceeds 3%. Likewise countries such as china and India have become leaders in certain sectors with high added value such as IT, hardware for telecommunications, biotechnology, etc.

In this context, as is well known, Spanish presence in these countries has been very limited, although a turnaround has been noted in recent years because there are increasingly fewer companies that are not affected, in one way or another, by the Asian boom. consequently, either due to the competition arising from these countries or the opportunities in their markets, the Spanish company is increasingly aware of the need to seriously address the challenge of Asia. Today some clear examples of success can be seen in markets that are highly complex yet offer fantastic possibilities to yield returns on investments.

We are still far behind other european countries like Germany, Italy or france, but to show two examples, exports to china grew 23% and to India by 10% in 2011 compared to 2010. Asia, on the other hand, represents 8% of total Spanish exports, while a few years ago it only represented 5% of the total.

The direct presence of companies in the Asia-Pacific region has also increased significantly. During the 80s and 90s, SMes were the main form of investment in the region, many of which were family owned. excessive red tape deterred large Spanish companies from becoming established in Asia, owing to legal restrictions and the inherent difficulty of operating in very different markets. However, in recent years, we have witnessed a disembarkation of large Spanish companies in sectors such as infrastructure, banking or telecommunications, and hopefully in  the future this emerging presence will be consolidated as barriers disappear and experience is gained in these markets.

From a sector-specific perspective, there are infinite opportunities but I will mention a few:

Agri-food products: the demand for products such as wine or oil is growing exponentially because of increased knowledge about the Mediterranean diet.

Infrastructure: 11 of the 15 most populous cities in the world are in Asia, and their needs are colossal. Moreover, a large part of the roads, ports, airports in the region need to be modernised as a competitiveness factor for the economy of the different countries.

Fashion, design and luxury goods: the major Spanish chains are opening many stores throughout Asia, since a significant part of the population is adopting Western tastes.

Tourism: china is already the largest source of tourists in the world, surpassing the United States. furthermore, countries like Japan, India and the big ASeAn countries are also important sources of tourists.

Automotive sector and other industries: the drag effect that favours the shift in this industry towards the Asia-Pacific region is forcing many companies to set up industrial production centres in Asia in order to supply their customers.

Services: as already mentioned, there is an important niche for companies in sectors such as banking, insurance, although it will require more liberalisation in some markets to operate with guarantees.

Education: In general, Asians place a lot of importance on education from an early age, and for many years now students have been travelling to different countries to complete their studies. In some of the leading Spanish business schools the percentage of Asian students exceeds 25%, but there is still a long way to go in the collaboration between universities and the presence of Spanish students in language schools.

Another aspect to be highlighted is the potential that our country has for attracting investments. During the 80s and 90s, the investment activity of Asian companies in Spain was led by Japan, and this coincided with the period of international expansion of their businesses. However, in recent years we are witnessing a similar phenomenon with chinese and Indian companies, which are starting to look towards our country for some logistics- or industry-related projects. There are many reasons why Spain is interesting for the Asian investor, including the logistics of the ports around the country and its experience in areas such as renewable energies, tourism or other sectors. More investment activity should be developed through greenfield projects, acquisitions or via partnerships with strategic content.

Finally, from a geographical point of view it is difficult to prioritise in a continent which is home to 60% of the world’s population. However, it is true to say that our companies do not pay enough attention to the enormous strength of high power economies such as china, Japan and India. It is worth noting, for example, the major boom being experienced by different ASeAn economies (in particular Indonesia, Singapore, Vietnam, Thailand, Malaysia and the Philippines) and the strength of Australia or Kazakhstan, where Spanish companies are landing major contracts for infrastructure development. South Korea should also be mentioned in this list, given the recent free trade agreement that was signed with the European Union, allowing our products to be more competitive by dismantling tariffs and easing access to the local market through investments.

With respect to Spanish brands, there is a particularly important phenomenon that should be noted: the rising middle classes in many of the countries in the region. Indeed, growth patterns in many countries have relied to date on investment and exports, while domestic consumption has been less critical for the economy than in any developed country. However, these parameters are changing and in the coming years we will witness a change in the economic model that is already affecting many countries in the region. In short, Asians will probably consume much more, since they will have greater financial resources.

For instance, according to recent data from the World Bank, the level of mobile phone penetration in china and India has reached 73% and 72% respectively, this means that there are more than 1 billion chinese and 900 million Indians that have a mobile terminal, while in the US the number of terminals amounts to 320 million, about one-third of these numbers.

In short, it appears that for any brand which wants to have a strong international presence, conquering the Asian market is a necessity for volume and current and future growth. It should not be forgotten that global trends for the consumption of many products have originated in Asia, as a matter of economies of scale.

Studies conducted to date by various institutions on the Spain brand in Asia agree that this is still vague and clichéd. This does not necessarily have a negative connotation, but rather indicates that there is a great opportunity to build a country image based on the excellence of our companies and on some of the strengths that are mentioned earlier.

In conclusion, Asia may be a crucial factor in improving the economic situation of Spain, because the potential for export growth and for attracting investment is huge. Spanish brands therefore need to make a firm commitment to the countries that are best suited to their characteristics within this continent in order to adapt their international presence to the opportunities that exist in a global market.